Rick Warren sent an email out today, to pastors who are members of his Pastors.com website, explaining why it’s good idea to preach sermons in a topical series instead of one sermon per topic.

You might think this idea arose out of a desire to find better ways to convey sound Biblical teachings to his listeners in a way that would help them remember.  But he makes no mention of any such concerns.  Instead his concerns revolve around marketing the church and saving time.

Warren believes that preaching a series of sermons on a single topic is a great marketing strategy for increasing the size of the church and, with the added benefit of saving a pastor’s very valuable time.  He wants all the pastors who follow him to know about it this great new marketing tool.Instead of having a pastoral concern over the best way to disciple and teach believers, the concern he prioritizes in this email is how to best use a sermon series to entice people to come back.

Instead of focusing on developing sermons that touch believers with sound Biblical doctrine and leaving church growth up to the Holy Spirit, Warren sees his sermons as a marketing tool to grow the church through human effort and enticements.

Here are his top reasons for recommending preaching in a series:

In other words, the pastor’s reputation would be at stake!  Forget whether it might be necessary to use more than eight weeks to, say, go through the book of Hebrews. Forget whether a series on the book of Hebrews might benefit your congregation spiritually. Just make sure you cut it off after eight weeks so they won’t begin to have doubts about you.

So to re-cap Warren’s reasons for advocating a series of sermons on the same topic, we have:

A screenshot of Warren’s message: 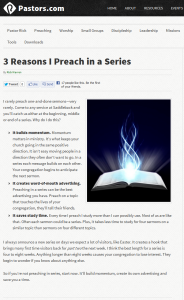