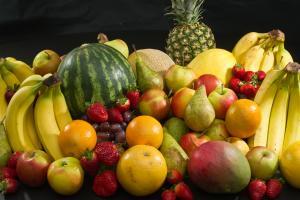 While I was a member of Tim Keller’s Redeemer church for nearly 20 years, I would sometimes have conversations with other members about the finer points of his theology and teachings. Whenever I would point something out that didn’t seem quite right (i.e. Biblical), the knee-jerk response was almost always, “You can’t argue with his fruit.”  By that they meant that he had built a very large (and wealthy) following, and surely that couldn’t have happened, they were suggesting, if God wasn’t blessing his ministry.  And God wouldn’t bless his ministry, their reasoning continued, if he wasn’t being true to the Word of God in his teachings.

The problem with that line of reasoning is that nowhere in the Bible do we see a church lauded for being large (or rich).  And nowhere do we see Biblical teachings that would suggest the church’s mission is to grow as large as possible.  What we do see are admonitions that a church must stay true to the Word of God.  Therefore any church that remains true to God’s Word is considered one that is bearing good fruit.  Any church that twists or distorts the Word of God is considered a bearer of bad fruit – no matter how large a church it may be.

There are endless debates online about whether Tim Keller is the conservative, evangelical Christian that the church touts him as.  But all of these debates could be quickly ended simply by looking at the fruit of his ministry.  This fruit presents a far clearer picture and should end the debates.

In Jesus’ teachings on good fruit, He said this:

“A good tree can’t produce bad fruit, and a bad tree can’t produce good fruit. A tree is identified by its fruit. Figs are never gathered from thorn bushes, and grapes are not picked from bramble bushes. A good person produces good things from the treasury of a good heart, and an evil person produces evil things from the treasury of an evil heart.”

In May, 2015, I received the following email from Redeemer:

This email came from David Kim, the Executive Director of Redeemer’s Center for Faith & Work (CFW).  First, I should tell you that the CFW is an integral and important part of Redeemer.  The church pours almost a million dollars into it each year ($959,404 in 2014 to be exact).  And it employs several full-time paid staffers.  David H. Kim is the Executive Director.  The CFW website used to say that it was the “social justice arm” of the church. They have since removed that polarizing phrase on the current version of the site.  But that is indeed what the CFW is all about – as you can easily discern by taking a quick look at their website.

The email from Kim started off with the stunning admission that “At CFW, we believe that the arts are critical to the flourishing of our city.”

We’re so used to hearing statements like this from secular organizations that we almost don’t blink when we read it.  But this is coming from a church.  Think about that for a minute.  A major purported Evangelical, conservative church that claims adherence to Biblical authority says “the arts” are critical to the flourishing of the city.  Yet you can’t find a single word in the Bible about the arts being critical to anything!

It would be one thing to say the arts are important or helpful, but for a church to say they’re critical shows only that that church has lost its way.  The only thing that’s critical from a church’s point of view is the Gospel of Christ.  If Redeemer were perhaps promoting arts ventures that revealed the Gospel through art, that would be one thing.  But they don’t even do that.

The arts are so important to Redeemer that they constantly send variations of this message over and over again throughout the year.  Here’s another example from October 7th, 2015: 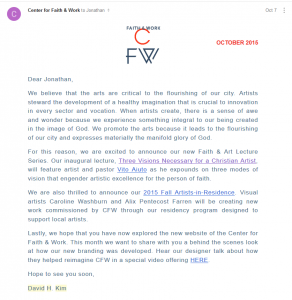 Yet I have never seen an email from Redeemer’s Center for Faith & Work (or from any other part of Redeemer for that matter) stating that they view the spread of the Gospel as critical to the flourishing of the city.  Never!  Kind of unusual for a conservative evangelical” church, don’t you think?

This is indeed the fruit of Tim Keller.  No Christian no matter their background could find Biblical warrant for a church supporting the secular arts.  And especially not to the tune of almost a million dollars a year.

It might serve us well to go back to Scripture to see what God tells us the purpose of the church is.  You’ll find a startlingly different agenda from that which Redeemer works towards.