This article is courtesy of: MidnightWatch.typepad.com 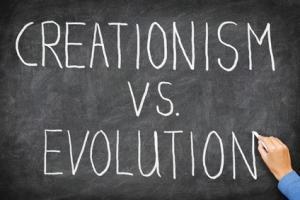 From a website titled ‘Worst Behaved Citizens’ (see link below), Ken Ham is not only labeled a miscreant, but placed in the same category as heinous murderers such as the Norway shooter and Qaddafi. This kind of venomous hatred is typical, and to be expected, from the left’s “progressive” ilk, therefore it is easy

(albeit unwise) to dismiss this particular example. But be warned, it is becoming prevalent throughout the church as well, communicated usually with far more civility, no overt malice, and masked behind a veil of orthodoxy.

I am not afraid to be branded as ignorant, or even dangerous, for holding to the infallibility, inerrancy, sufficiency…. truth… of scripture. God said it, that settles it, regardless of whether I believe it, and regardless of what the scientific community, or academia, or Manhattan socialites have to say on the matter.

Evolution is totally incompatible with not just scripture as a whole, but specifically the gospel, which are truly interchangeable terms because the gospel can be found by those with eyes to see from the first verse in Genesis to the last verse in Revelation.

Evolution is a process predicated by the necessity of death. Death could not have existed prior to the fall. Death was either a consequence of the fall and our subsequent sin nature (the wages of sin is death) or it was not. If there was no fall, there is no need for Christ’s redemptive work on the cross and atonement for our sins. An embrace of evolution, or even an allowance for it as a legitimate discussion point within Christianity is subsequently a logical rejection of the Gospel. 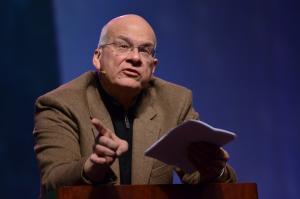 Tim Keller’s eschatology marries nicely with his high view of man. From his own mouth, during an appearance at a small but quaint Montecito fundraiser, I have heard his vision for the future. Imagine a world in which rural inhabitants have been absorbed, swallowed if you will, by monolithic urban centers… (I’m sure you’ve heard the word ‘city’ present itself with more frequency throughout mainstream evangelicalism.)

Well, the greater things that are yet to come and the greater things that are still to be done in the city, to paraphrase Chris Tomlin, is specified by Tim Keller to be an ever-growing, ever-expanding network of mega-churches. He cited some intriguing statistics to demonstrate that the percentage of evangelicals within a population is directly proportionate to the number of churches. Hence, if the church raises up enough leaders who share Mr. Keller’s (and Rick Warren’s, Mark Driscoll’s, and so many others’) vision, and plant enough mega-churches around the world, someday we’ll have a ‘christianized’ society and an established a post-millennial kingdom on earth.

The reality though is and always has been that what is envisioned as a utopian dream can only ever be realized as a dystopian nightmare by fallen humanity. Only when Jesus Christ returns will we ever experience a utopia.  And this utterly human concept will be realized beyond our imagining in the form of a theocracy in which He Himself will rule and reign over the inhabitants of the earthly millennial kingdom.

God bless you Ken Ham, for your willingness to stand for truth, unashamedly, regardless of the consequences. I join with fellow believers who are lifting you up in prayer, that God would continue to manifest the fruit of the Spirit in your life and ministry, and keep you from the evil one. “For I am not ashamed of the Gospel of Christ, for it is the power of God to salvation for everyone who believes.” – Romans 1:16

Ken Ham is the founder of the “Creation Museum” described as “The state-of-the-art 70,000 square foot museum brings the pages of the Bible to life, casting its characters and animals in dynamic form and placing them in familiar settings. Adam and Eve live in the Garden of Eden. Children play and dinosaurs roam near Eden’s Rivers. The serpent coils cunningly in the Tree of the Knowledge of Good and Evil. Majestic murals, great masterpieces brimming with pulsating colors and details, provide a backdrop for many of the settings.”via worstbehavedcitizens.com